I said, "Hey, Coach. I'm going to go grab a bite?. He goes "Lunch? I've got four kids over there. I don't even know who they are. Their coach sent 'em here. Three guys over there don't have 12 units. Those four over there don't have a place to stay. We still gotta do playbooks. There's some stale donuts in the foyer there. Grab some of them if you're hungry and grab some of these kids and get some work done." I said to myself, "After this year, I'm done." 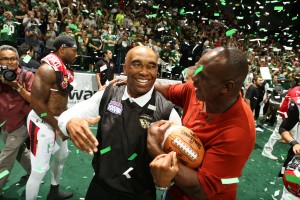 In his final game as the coach of the San Jose Sabercats, Darren Arbet celebrates a fourth ArenaBowl championship

In November 2015, the San Sabercats surprisingly folded following a fourth ArenaBowl title and an unprecedented 20-1 season. Former head coach and co-owner Darren Arbet takes a look back at his career with the storied AFL franchise and embracing new goals. The once self-described “knucklehead” changed his career direction after a failed personal relationship and reached heights few have reached in his sport. In this podcast, Arbet describes his relationship with owner John Fry, the glory years and the efforts to keep the team afloat after winning a championship in his hometown. Inducted into the Arena Football League Hall of Fame in 2011, Arbet is at peace with what he accomplished in the indoor game and now has taken on the challenge of rebuilding Cabrillo College.