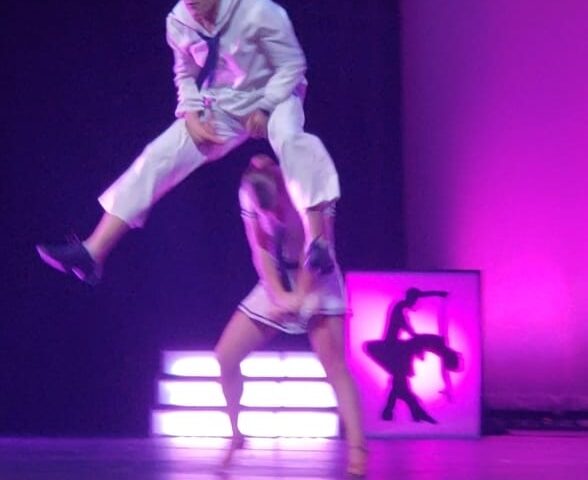 “For many people, there are somedays – ‘someday I’ll do this,’ or ‘someday I’ll do that,’” said the NBC News Radio sports anchor. “Often life or fear gets in the way and someday never happens. My dance was for them — that their someday happens, and I’ll be in their audience rooting for them as they go for the Mirrorball in life.”

For six local luminaries, someday came on May 12 when they took the stage to compete in the first-ever “Dancing with the Tri-Valley Stars.” The gala fundraiser was modeled on the hit TV show Dancing with the Stars, which is now in its 13th year and famous for its coveted Mirrorball Trophy. The competitors were Lewis, Faith Alpher, Mony Nop, Karla Brown, Bob Carling and Juliette Goodrich.

“I was very nervous before the show,” said Emmy-winning anchor Goodrich. “I had to do a live shot for the KPIX 5 newscast before the competition and I can honestly say I had butterflies. It reminded me of doing my first live news report years ago when I started out in the news business.”

Goodrich danced a rousing country two-step to the song, “Save a Horse, Ride a Cowboy.”

“My takeaway is to stretch outside your comfort zone at any age,” said Goodrich. “Give it your all and go for it!”

From the moment the seats began filling, the atmosphere inside Livermore’s Bankhead Theater was electric.

“I enjoyed how enthusiastic the audience was; it was some of the loudest cheering we’ve ever heard inside the Bankhead,” said Roberta Emerson, marketing manager for Livermore Valley Performing Arts Center (LVPAC). “All of the stars were supported and encouraged throughout the evening. There was more camaraderie than competition.”

Stars had less than a week to prepare. The Sunday prior to the show, the Utah Ballroom Dance Company rolled into town and began working with the dancers to choose a dance style, select music, be fitted for costumes, and learn a 90-second dance.

“I was super nervous, but after it was over I wanted a do over,” Alpher said. “It was so much fun. Everyone has to get comfortable being uncomfortable. Do something different. When you get out of your comfort zone, that’s when beauty really happens.”

“I was delightfully surprised at the contestants’ level of performance, but not at all surprised by the amount of confidence. Nerves of steel, all of them,” said Fahr. “It was super fun! I channeled my inner Carrie Ann Inaba and tried to remember the compliment sandwich: compliment, gentle critique, compliment. We were only allowed to give one 10.”

Scores came not only from the judges but also from audience members. While votes were being tallied, the Utah Ballroom Dance Company’s award-winning dancers put on a spectacular show with numbers that included Booty Swing (Charleston), Harry Potter (Viennese Waltz), Bond (Cha Cha), and A Dream is a Wish (Quickstep).

“I loved watching the professional dancers after our portion of the show was complete,” said Pleasanton City Councilmember Karla Brown, who danced a tango to the song Jealousy. “The Bankhead staff saved us great seats so we could watch the professionals perform with their highly-trained dancing skills. It was truly inspirational.”

“I felt apprehensive to start, and thrilled to have done it when finished,” Carling said. “Watching the professional dancing was terrific. They are so talented.”

Yet Carling himself dazzled one audience member in particular.

“I felt proud. He was the oldest contestant and he did wonderfully,” said wife Sue Carling. “He did it because he loves Livermore and the Bankhead. It was very special seeing him on that stage.”

Dancing with the Tri-Valley Stars was hosted to raise money to fund the Bankhead’s student-discount program.

“We hope to make this an annual event and build on our successes,” said LVPAC Executive Director Scott Kenison. “There are many would-be dancing stars out there just waiting to ignite. This was an important community-building opportunity for us, and we had a lot of new patrons at the Bankhead the night of the show.”

Real estate agent and former Livermore police officer Mony Nop, disco dancing to “Hot Stuff,” said, “We have an amazing arts community in Livermore, and I’m so glad to be able to contribute in some small way. I loved every second of it! I learned I can stretch myself beyond what I know I can do. More importantly, it was fun to learn how to dance again, and I met some incredible people with this great opportunity.”

So who is the inaugural Dancing with the Tri-Valley Stars winner?

The honor and Mirrorball Trophy went to Dave Lewis, who swing danced to “Candyman.”

“While it was a competition I wanted to win, I never expected to win. When we got down to the final two, I held Faith’s hand and thought she had won,” said Lewis. “It’s a blessing I’ll remember always, and I’m so grateful for the audience that filled up the theater. The energy of the crowd helped pull us through our performances. The entire experience exceeded my expectations. The support for all six of us was tremendous. I know we all rooted for each other. I made of bunch of new friends that I never would have met if I had not been a part of this. It was a win in every possible way.”