"Best guess is I say he comes back just because I'm never ever going to count out Joe Thornton for wanting to play. And my guess is his love of the game is as great as it was when he was 20 and he's a guy who's got plenty left in terms of being able to contribute. Having said that, do I think he's going to win the Art Ross Trophy? No. All great players go through this period where they change their role and the way they contribute to a team. Joe Thornton will always be someone who can help with the power play, developing young players and showing the work ethic and so forth. He has that fertile hockey mind that's so rare." 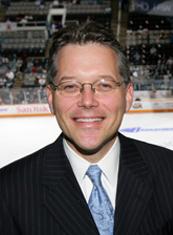 With the end of the NHL regular season, the San Jose Sharks will miss the playoffs for only the second time in 16 years when and if there is a postseason. The team’s longtime radio announcer Dan Rusanowsky chatted with Dave about how he’s been spending his shelter-in-place. Rusanowsky offered his love of cooking and go-to dishes along with discussing the team’s future and what is needed to back to the playoffs. Will longtime fan favorite and future Hall of Famer Joe Thornton return to the team next season? The Bay Area Radio Hall of Fame announcer looks back at some of the best teams in franchise history that knocked on the door of a championship along with the steps being taken to bring hockey to young people without the normal resources to take up the sport.