"People think I care about these issues because I have a black husband or a biracial son and I tell people, actually, the time it impacted me most closely was coaching a mostly black team at Cal and seeing the world through their eyes and the experiences they went through. We flew commercial and would be going through security and inevitably someone would get stopped and searched. And it wasn't me...ever. And watching the way some commentators and fans talked about these women you and I knew so intimately, it was hurtful sometimes to hear some of the language used." 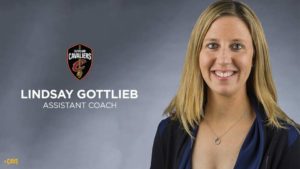 Making history as the first women’s college basketball coach to make the jump to the NBA, Lindsay Gottlieb navigates not only a career change as a wife and mother–but doing so during unprecedented times in American history. She reflects fondly of her time at Cal, calling it the best experience of her life along with what went into the decision to move to Cleveland. Gottlieb tells Dave what she’s seen first-hand with bigotry as a coach and how the killing of George Floyd resonates with her and the rest of the NBA. What she did to break into coaching will stretch the boundaries of what most believe of the concept of “above and beyond” as an example of passionate goal setting. The self-described “basketball nerd” gives her family credit for instilling a willingness to take chances in life and to “go for things that scare us.”