Late to the Bandwagon…and the Boat 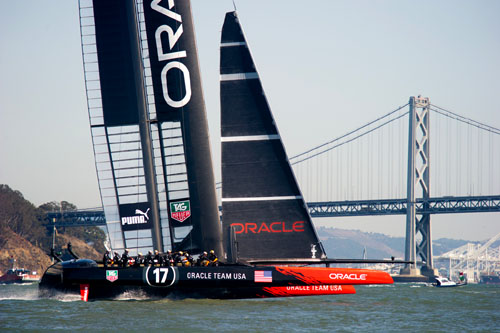 As I type, I'm immersed in Oracle Team USA completing an improbable victory to reclaim America's Cup--and eating crow instead of caviar.  Watching Larry Ellison's high-tech marvel AC 72 roar back from 8-1 down to defend the Cup is as amazing a comeback as ever accomplished in sport, staring down match point for a week.  Skipper Jimmy Spithill was thought to have needed a padded cell y for saying such a comeback was possible.  Cheers to you, Jimmy.

The Raiders continue preparation for Sunday's game with Washington with the players association probing if quarterback Terrelle Pryor should have returned to the Monday's loss in Denver after taking a shot in the fourth quarter.

Dennis Allen said he had a conversation with Pryor after the hit before allowing him to take two more snaps.  Experts says concussion symptoms don't always show immediately--which should make teams err on the side of caution if there's any doubt a player suffered a head injury, especially with concussions such a hot-bottom issue.

At the youth levels, coaches now have to complete a concussion certification where we are to sit a kid if we suspect there's been a head injury.  With Monday's game already decided, Pryor probably should have been out of the game before getting nailed--certainly not two plays after.