"Kobe said....you have to envision, see yourself being great even if you're not great yet. I'm like 13 or 14 and I'm like 'what the hell does that mean.?' Eventually, I got older and started to watch him win championships and I think it's starting to click of what he was saying. I have to see myself so I have to envision even though I'm not there, I still have to work toward being there because that's my end goal." 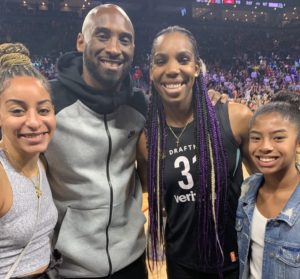 The helicopter crash that killed NBA icon Kobe Bryant, his daughter Gigi and seven others left Reshanda Gray reeling. As a teen looking for direction, Gray met Bryant through the After School All-Stars program and inspired her with the words that “dedication sees dreams through.” Her commitment would take her from the crime-riddled Hoover neighborhood of South Central Los Angeles to the University of California, where she was named the Pac-12 Player of the Year. From Berkeley, Gray would move on to the next level and is now with the New York Liberty of the WNBA. In the WNBA off-season, Gray plays professionally in South Korea and spoke to Dave about life overseas, growing up as one of seven sibling, being the first in her family to graduate college, making a trip to the Final Four and how that meeting with Bryant changed her life. Gray is committed to paying it forward to make a difference in the world with her non-profit, the No Gray Areas Foundation. Enjoy our podcast with Gray Gray talking to Dave from Asan, South Korea on the D-Lew Show.