Why Chris Filippi Embraced Challenge of 48 miles in 48 hours.

"Every day you've got to get yourself up. You've got to use that drive to...answer the bell. And that's one of the things that appealed to me about the 4 x 4 x 48 is that essentially what your doing is--you're not taking a punch. You're not in a ring. But there are similarities to a boxing match in that you need to answer the bell not once, not twice, but you need to do it twelve times." 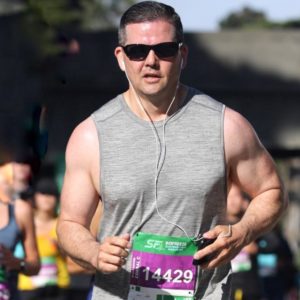 Inspired by the story of Navy Seal David Goggins, Chris Filippi sought to step up his physical game following his first marathon. The new test of conditioning would be running four miles every four hours over the course of two days–48 miles in 48 hours. The BART spokesman and former radio reporter at KCBS breaks down the challenges–both mental and physical in pulling off the feat, what stops others from accomplishing challenges and how breakthroughs like these transcends every area of life. We recorded on conversation immediately following the second presidential debate so we started with a breakdown of the biggest story of the day. Who scored the most points and was either candidate able to move the needle with the few remaining undecided voters.

Why Chris Filippi Embraced Challenge of 48 miles in 48 hours.