"It's never too late. My mind is set here. When I found out I was going to the (parole) board, I automatically said okay, you're going to get out the first time you go so let's start looking at your options. Okay, when you get out, you'll be 54. It's going to be a month before you're 55th birthday. That means you're going to have an opportunity to have a career in sports broadcasting. If you can make it happen, you can start at 55 and possibly go to 80-years-old, maybe 85.... so as long as your vision is good and your mind is sharp, you can have a job in sports broadcasting." 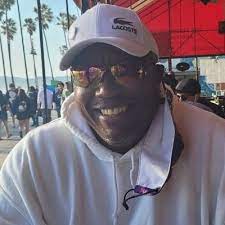 After serving 26 years in prison for armed robbery, Aaron “Showtime” Taylor had the opportunity of a lifetime as the guest public address announcer for the Golden State Warriors game against Houston on April 10. The night in the spotlight followed years of play-by-play for a captive audience and caught the eyes and ears of Warriors’ management during the organization’s annual visit to San Quentin State Prison. Taylor isn’t resting on his laurels and continues pursuit of his dream to be a high-level play-by-play announcer. Inspired by a broadcasting icon, Taylor insists he won’t be denied and that he’s even capable of making curling exciting.