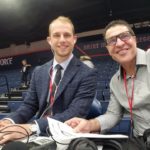 Once upon a time, Saint Mary’s versus Santa Clara brought out generations of loathing in all sports. From my time in the South Bay as the voice of the Broncos, players at Santa Clara learned of their hate-filled responsibilities shortly after finding the locker room. Likewise, Saint Mary’s viewed the games against Santa Clara as season-makers. Fans fought in the stands, pranks were played and some emotionally–charged fans ended up in jail.

Over the last decade, the basketball programs have trended in different directions, taking some steam out of the rivalry. As luck would have it and with the blessing of some amazing people in Moraga, I’m now the color commentator at Saint Mary’s. It’s a true blessing to have friends on both sides of the rivalry. Former Gael Frank Knight and ex-Bronco Drew Zurek look back at the intensity and disdain for their opponent.

"The year we cut the program for football was our freshmen year," said former Bronco Drew Zurek. "Within a couple weeks, it may have been that week, we were playing in Moraga. And their students! I don't know how many footballs we saw in the crowd that day. They had students that went behind our bench and were playing catch with the football right in front of the Santa Clara crowd."
Do you like it?0
0 Read more
Categories

Jay Love of Mix 94.1: Cancer-free and Making the Most of his Second Chance

Three years ago, J. Love was diagnosed with Stage 4 throat cancer, enduring excruciating chemotherapy and radiation. Today, he’s cancer-free and the program director of Mix […]
Do you like it?0
0 Read more
Categories

Fuel for the Fire: Inside the drama at Golden State and a look at the NBA with Bill Herenda

"I think it's foolish to believe that teams don't have some type of dysfunction within them regardless of their record and place in the standings. And this, obviously has gone public But I feel this is more trending toward a bump in the road than an implosion because those guys realize how special it is what they have and I think they'll be hungry to rekindle it and get back to that level of play soon.
Do you like it?0
0 Read more
Categories

Beyond Bending: Yoga Pro Looks to Heal the World

"You have to learn to see yourself. You're hiding something. And not just the physical body. We're talking about everything goes on internally. The emotional body. That's why we go there--to heal, really because the yoga is really mental work.
Do you like it?0
16 Read more
Categories

"It plays on the radio and everybody freaks out thinking Jojo was just attacked or abducted by a ghost. So it played and I went into commercials and then he called me in the studio. And when I picked up the phone, somehow our conversation was going out over the radio. I was like, 'Jojo, it sounded really good. I'm sure everybody really believes it.' So he and I are talking about how good he faked everybody out. Meanwhile, I hear somebody running down the hallway and the studio door bursts open and it's my boss. And he's like, 'You're on the air.'...there was some switch I didn't know was on."
Do you like it?0
0 Read more
Categories

"The only thing that would take it to the next level is having my novels made into movies...I think it's just a matter of time. People are actively looking right now. This is a great time to be in romantic comedies."
Do you like it?0
0 Read more
Prev page
1234567891011
Next page