"If you're not nervous, that's a problem...Pressure is a privilege. I think that may have been Billie Jean King. And to really understand that and get after it, it's really important. And I think there's a balance, too. Of recognizing you are enough, too. And that's what Jenna Fischer talks about in her book that sometimes you don't have to be over the top--that you are enough." 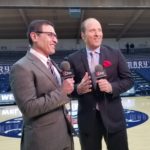 Near the end of his run at the morning sports anchor at KFPK in Sacramento, Bill Herenda took a leap of faith. He moved is family to Southern California to look for other opportunities. While knocking on doors for jobs as a basketball analyst, Herenda began exploring acting. On Feb. 7, 2019, Herenda made his network television debut on an episode of S.W.A.T on CBS. Hear what’s next for this up-and-comer who’s proving it’s never to late to chase a dream.